The 2015 season for Sam Houston State was, by their own high standards, somewhat of a disappointment. The high-powered team ran roughshod over their competition all season, scoring more than 35 points in every game. That is, until the team ran up against James Madison in the FCS football championship quarterfinals. After back-to-back trips to the semifinals, the Bearkats season would end in a rout 65-7.

Now the Bearkats return most of their core on both sides of the ball, looking to redeem themselves from the failures of last season. Led by senior quarterback Jeremiah Briscoe and a bevy of weapons at the skill positions, will this be the year Sam Houston State can finally get over the hump? Will they finally take that next step and get to that ever-elusive championship game? 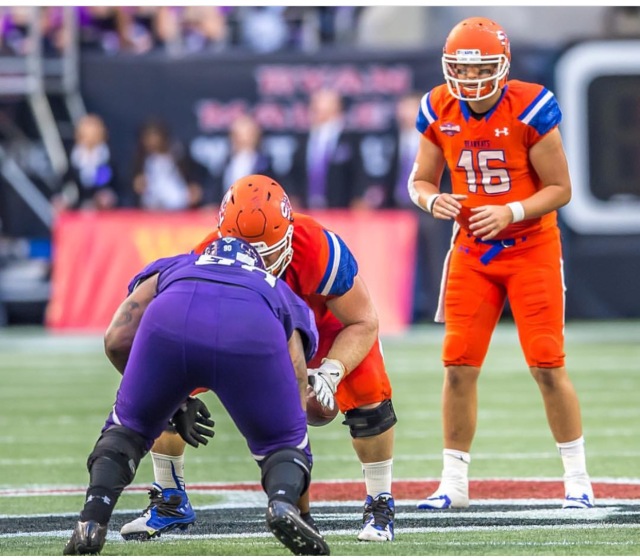 The Bearkats “air-raid” offense returns an amazingly-talented nucleus of players. Perhaps the most talented unit in the entire FCS. Senior quarterback Jeremiah Briscoe looks to continue to build upon an already impressive resume. In his first years as a full-time starter in 2015, Briscoe blistered the Southland Conference competition to the tune of over 4,500 yards, 57 touchdowns, and the Walter Payton Award. Even more impressive, he took home the award over potential first-round wide receiver Cooper Kupp from Eastern Washington.

Briscoe doesn’t do it alone, obviously, and he sees his favorite targets return for one more go-round. Both Yedidiah Louis and Nathan Stewart eclipsed the 1,000 yard plateau, with Stewart averaging a staggering 19.3 yards per reception. Both Louis and Stewart also hauled in more than 10 touchdowns — 14 and 12 respectively. They were joined by Davion Davis in the 10+ touchdowns category, and Davis fell just 40 yards short of joining them in the 1,000 yard club.

In addition to Briscoe and the electric trio of receivers, the Bearkats also return starting running back Corey Avery. Avery had a somewhat disappointing season in 2016, and will surely be looking to redeem himself and return to his 2015 numbers. The offense also sees the return of some key offensive linemen. Both Tyler Tezeno and Sam Hardy will be back to open holes for Avery and give Briscoe the time he needs to marshal the offense. The Bearkats offense returns studs at every level.

If the Bearkats are going to get over the hump, they aren’t going to do it on offense alone. Lucky for them, they have some great talent returning on the defensive side of the ball as well. Three of their top-five tacklers from a year ago return the help give the team another dominating performance.

Justin Johnson, Adrian Contreras, and Alfonzo McMillian are all returning, and all will be key contributors to the Bearkats success. As important as those three are to Sam Houston State’s success, the heart and soul of their defense is defensive end P.J. Hall. Hall was the team’s leading sack artist last season, and fell just short of taking home the Buck Buchanon award as FCS’ top defensive player.

Things may get rough for the Bearkats in the coming years when all this talent leaves, but for now the future is bright in Huntsville.