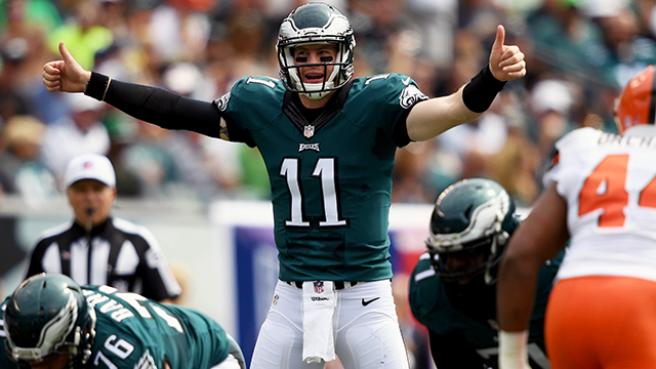 The Eagles start the season on the road against a team that has owned them as of late. (Skins have won the last 5 meetings) However, the Eagles loaded up on the D line this off season and improved both the running back and receiver positions, while Washington has an unhappy Quarterback that just lost 2 of his top receiving threats. The Redskins did add Terrelle Pryor, and got a steal in the draft with Johnathon Allen, but I expect to see an improved Carson Wentz lead the Eagles to victory.  Eagles Win (1-0)

Road games are tough to win in the NFL, especially when they’re back to back to start a season. The Chiefs went 12-4 winning their division last year and there’s no reason for them to not be just as good in 2017, and they added former Eagles D linemen Bennie Logan. While I do expect to see an improved Eagles team from a year ago, I just think the Chiefs will be too much for the Eagles on the road. Eagles Lose (1-1)

The Giants believe they can win now, and that’s evident with the moves they’ve made the past 2 off seasons, giving established veterans lucrative deals. However, they haven’t done much to improve their O line that was terrible last season, and their running game may even be worse than last seasons. Eli Manning has been on a steady decline and the Eagles defense just looks down right nasty this year. I see the Eagles handling the Giants rather easy in their home opener. Eagles Win (2-1)

The Chargers haven’t been winning the past few seasons, but I don’t think that’s a real indicator of their talent. They have a future HOFer in Phillip Rivers and don’t forget about Keenan Allen either, because when he’s healthy, he is a top receiver in this league. They also drafted Hunter Henry last season and Mike Williams this year—I think that Chargers offense has top-10 potential. But, I do believe the Eagles have a better all around team and should beat the Chargers in a close contest. Eagles Win (3-1)

The Cardinals had a rough 2016 season, but don’t expect the same in 2017. They reloaded and I think they’ll compete for their division title in 2017. The last time these two teams played David Johnson shredded the Eagles D, however, he is coming off an ACL injury that cut his season short last year. I can see this game going either way, but the Eagles are at home so I’ll give them the win. Eagles Win (4-1)

While Carolina’s secondary may struggle, they have one of the best front sevens in the NFL. This Panthers defense looks like it can be top-10 caliber. Panthers seem to be an all around solid team this year. They added Christian McCaffrey and Curtis Samuel to an already potent offense—chances don’t look too good for the Birds on the road. Eagles Lose (4-2)

First Monday Night Football game of the season. I have the Eagles winning for all the same reasons I had them winning week 1, plus they’re at home this time. Eagles Win (5-2)

While I do like what John Lynch and the Niners have done so far, they’re nowhere near competing with this Eagles team. Eagles Win (6-2)

This game should be a defensive battle. The Broncos have the best CB tandem in the NFL and overall maybe the best defense in the league. Their major question however is who will be playing quarterback. The Eagles front seven is gonna look to get after whoever is under center but the Broncos beefed up their O line so the pass rush may not get their as early as they like—leaving the Eagles corners on an island. Eagles Lose (6-3)

Sunday Night Football in Jerry world. The Eagles and Cowboys went 1-1 against each other last year and looked extremely even in the first game (Dallas rested their starters in the second head to head.) I expect them to split the series this year again while each team wins their home game. Eagles Lose (6-4)

Alshon Jeffery’s homecoming game. In a prove-it year for Jeffery I expect him to play at a pro-bowl caliber level and put on a clinic against his former team. The Chicago Bears are a mess and the Eagles should handle them no problem at home. Eagles Win (7-4)

This is as tough a game you can have in the NFL, playing in Seattle late in the season. In order for the Eagles to even have a chance at winning, they must get to Russell Wilson early and keep him on his back all game. It’s a doable task, given how bad Seattle’s O line has played the past few seasons, but I just don’t think this Eagles team is on that level yet. Eagles Lose (7-5)

This is a battle of number 1 and 2 overall in the 2016 draft. Given how Goff played last season, the Eagles have a good shot to win this game. The Rams did add some talent around Goff in this years draft but the Eagles are the superior team. Eagles Win (8-5)

*Hot take alert* I think the Giants will already be out of playoff contention at this point and the Eagles will be neck and neck with the Cowboys for the division lead. Given those circumstances, I think Wentz will lead his team to a victory on the road. Eagles Win (9-5)

This Raiders team is the real deal, I wouldn’t be surprised to see them in the Super Bowl. With that being said, I think Eagles fans may be in store for a Blue Christmas this year. Carr vs. Wentz on Christmas evening should be a fun battle but I see this game going the Raiders way. Eagles Lose (9-6)

This one here is for all the marbles. Prescott vs. Wentz for the division title. Now some may say 10-6 won’t be enough to win the division, and it may not, but with tough schedules in the NFC East never say never. I had Dallas winning the first game and I’ve got Philadelphia winning this one in a close battle. Eagles Win (10-6) NFC East Champions